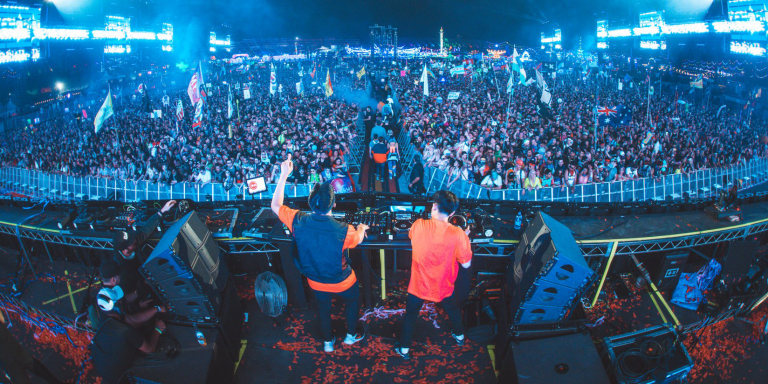 ARMNHMR Sets the World Free with “The Free World” Album

Thirteen songs, 45 minutes, and 45 seconds of pure melodic dubstep come with an emotional journey on ARMNHMR’s latest album, The Free World, released on February 7, 2020. Before the world needed to be free of what was soon to come, ARMNHMR delivered their first studio album. Several tracks had since been teased by the two at shows, festivals, virtual rave-a-thons, and some singles even dropped on Spotify before the whole album was released publicly.

ARMNHMR, a duo from Los Angeles, California, consisting of Joseph Chung & Joseph Abella, changes the game with their unique melodic bass dubstep sounds. One breakout set that put the duo on the map was their set from EDC Las Vegas 2019, where they opened up for Skrillex, a surprise guest set from Skrillex. Their style does not compare to anyone in the industry because they know how to steal everyone’s heart while incorporating the headbanging bass at the same time.

This album is a beautiful piece of art for anyone who wishes to turn their mind off and get lost with the eccentric vocals that mesh so well with each melodic drop and tempo. Each track takes the mind to an alternate reality where one can finally be at peace and put all troubles on pause. At one moment, listeners will be shuffling and ready to jump up and down to then closing their eyes while standing still and letting the music consume the body as the eyes remain shut. The anticipated album peaked in popularity with the rise of ARMNHMR, and it does not disappoint.

Personally, “Bulletproof“, “Forever Young” (feat. Melanie Fontana), “Silver Lining“, “Without You” (feat. Prismo), and “I Don’t Know You” (feat. Luma) are my top five of the album. Honestly, this was a hard decision to make because each track is a true masterpiece. “I Don’t Know You” (feat. Luma) reminds me of a familiar Skrillex song because of the old-school dubstep included in the track alongside edited vocals. Music helps incorporate emotions behind each sound which The Free World album expands on by creating human connections from beginning to end.

The debut album for ARMNHMR uplifts the soul while hitting everyone in all the feels and right places. The Free World album creates a sense of belonging for anyone who has experienced good days or bad days. The ARMNHMR family welcomes their community with open arms, and this album is no different. The next track on deck designs a different vibe, tone, and banger from the previous one played. Listen to the whole album now on most music streaming services.