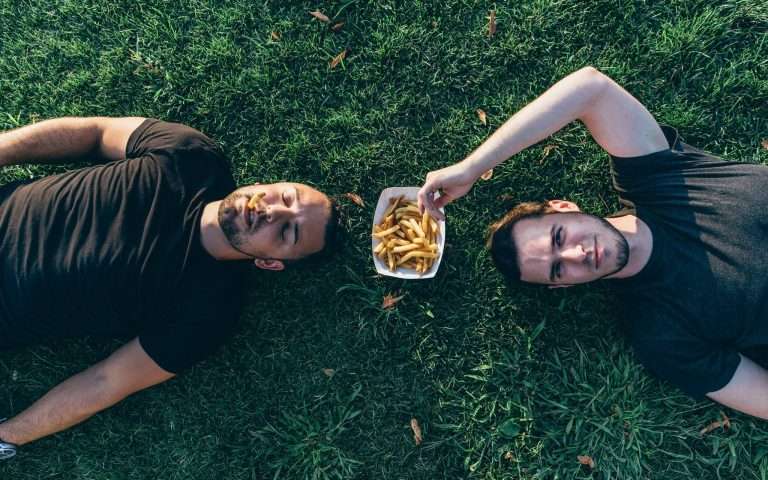 The music industry evolves every day to keep pace with societal changes. We have seen futuristic transformations such as holographic programs at concerts, drone shows at festivals, the rise of cryptocurrency, and the push for Non-fungible tokens (NFTs). Since the pandemic, artists have thought outside the box to monetize ways to help boost their lost revenue and business; in the past, canceled shows due to COVID-19 and streaming have taken out the possibility of recurring income. Many artists are going down the rabbit hole with NFTs. One of them is Disco Fries, a leading electronic dance music duo delivering a new innovative new experience and continuing to pave the way within music culture.

Disco Fries are forging their path in Web3 with a new pack titled ‘Friends of Fries,’ featuring some of its music, collaborators, and up-and-coming artists, dropping on RCRDSHP on Friday, April 29th. The pack features over 30 collectibles in total, with rewards and challenges for fans to have a chance at creating a track with Disco Fries, as well as a 1 of 1 fan experience, which includes a full studio day and dinner with the duo. Disco Fries are creating more utility and rewards from this pack than has ever been seen on RCRDSHP. It is even more proof that they continue to set a new standard for what can be done with music NFTs and all they offer.

Some readers may be asking themselves, “what exactly is an NFT?” According to Forbes, “An NFT is a digital asset that represents real-world objects like art, music, in-game items and videos. They are bought and sold online, frequently with cryptocurrency, and they are generally encoded with the same underlying software as many cryptos.” However, you are still probably scratching your head and still asking yourself, how do people make a profit from this? Instead of buying a physical piece of art, you are purchasing a digital object and becoming the owner of it, and there can only be one owner at a time upon purchase. “NFTs are different. Each has a digital signature that makes it impossible for NFTs to be exchanged for or equal to one another” (Conti, Schmidt, 2022). The artist can sell directly to consumers, attach royalties every time it sells to a new owner, and receive a profit.

RCRDSHP has become the approachable way into NFT’s with their affordable pack drops similar to NBA Shot, ranging from $9-20. Allowing fans to deep dive into tracks with many of the collectibles containing stems, behind-the-scenes videos, access to live events, and depth you won’t find in your average Beatport purchase. Disco Fries have fully embraced this and did the first music NFT fan driven event known as ‘Participate to Create’ a few months back in collaboration with RCRDSHP, over 250 collectors, and recording artist Lena Leon.

In addition to NFT drops, Disco Fries have created a successful platform known as Finish My Track. FinishMyTrack.com is where artists can take their music a step further to get it retail ready. If you need your drums replaced or vocals on a record, Disco Fries are powering what is now known as the “world’s first finishing house”, a step beyond just mixing and mastering a record. In addition to the website, the Disco Fries do a weekly live stream of the same name, bringing on A-list guests in the music and more significant entertainment space to share their wisdom on what it takes to break through the noise and cultivate a successful career in the industry.

Disco Fries took the bull by the horns in 2014 when they had a massive co-sign from Tiësto and co-produced his first platinum single in North America, “Wasted” ft. Matthew Koma. They started a label imprint which now boasts hundreds of releases and forged a joint venture with Sony for their publishing, where they have handed countless syncs and opportunities for the writers and producers they have signed. They’ve invested in businesses in the entertainment space such as the e-sports teams XSET and most notably, FaZe Clan which is due to debut as a publicly traded company in mid-2022 at a $1B valuation. They are investors in Chat for FIVE, a new app for influencers to monetize their business (think WhatsApp meets Cameo), as well as Arpeggi, the world’s first on-blockchain Digital Audio Workstation.

Disco Fries continue to pursue their passion as artists with a new EP slated for late 2022, singles alongside HARBER, Viiq, DOMENICO, and Lena Leon, and they will be exploring ways to expand into new investments to help uplift underserved artists and improve the efficiency of the music industry.