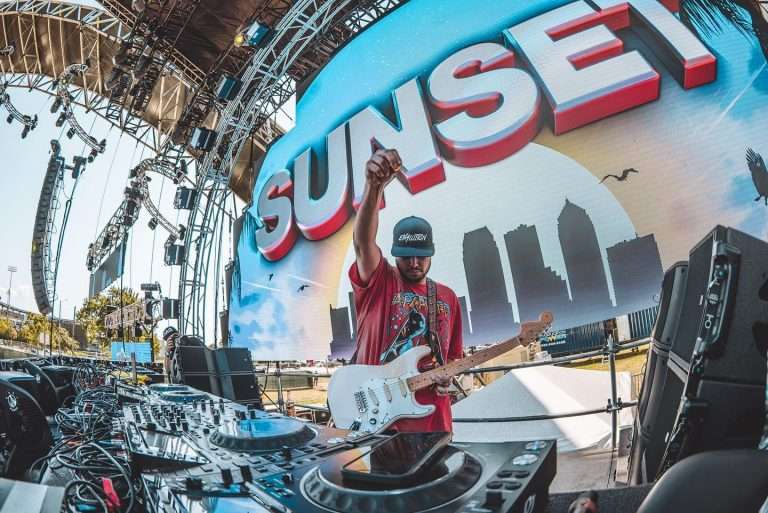 Look out, Colorado, because there is soon to be a new bass music capital in the United States, and its name is Florida. For the past couple of years, not only has bass music quickly risen in America, but it has risen to power in Florida, with bass festivals taking place and more artists coming to light. One artist who is evolving the Florida bass music scene for the better and painting the pathway for generations to come is Evalution.

Born and raised in Tampa, FL, Evan Cazes, known behind the decks as Evalution, first discovered his passion for music at eight years old. After pressing the keys of his father’s grand piano for the first time, his infatuation with music grew exponentially. Evalution quickly took on other instruments such as guitar, bass guitar, and drums. He began to develop his musical style and personal tastes by learning to play songs from his early musical influences, such as The Beatles, Led Zeppelin, and Pink Floyd.

Evalution takes pride in his work and creating a sound that connects his fans to emotions and rhythms and helps keep the momentum going. Since 2018, Evalution has honed his craft and released several tracks, mashups, and remixes that have garnered support from some of the biggest names in the industry, such as Adventure Club, JAUZ, Blunts & Blondes, TVBOO, and more. In 2021, Evalution started to leave his festival footprint by playing events such as EDC Orlando, Sunset Music Festival, and Home Bass.

EDMtilt had the pleasure of speaking with Evalution at Sunset Music Festival 2022 and opened up about his future goals, his thoughts on the Florida bass scene, and what is currently in production for the rest of the year.

Jason Adamchak: So, I have a podcast called Checking in with Adamchak, and it focuses on breaking the stigma around mental health in the music industry; before each interview, I ask how everyone’s mental health is doing, and I would love to continue that tradition with on-site interviews at festivals, so how are you doing mentally?

Evalution: I have something fantastic to say about that. I’m doing great. My best piece of advice, artists are human beings too. You getting online and spending 30 seconds typing something out can ruin someone’s entire week. And it’s like, if you don’t like someone’s music, that’s cool. Don’t go see them. I feel that’s why many of these artists feel bad because they have a band base where they have to represent, and they’re worried about, oh, what if I put out this genre of a song? Are people going to react to it? It’s sad to see because we are artists; as an artist, you want to see people making what they love to make. So it’s like the end of the day, artists are human beings too. I know sometimes people get upset but think about it if it were you. It doesn’t feel good to spend hours grading something for someone to be like, “Oh, this sucks.” Like that doesn’t help; however, constructive criticism is cool. I feel like people are getting way too comfortable with going online and talking shit about other people. That’s not good for anyone. So be kind to everybody. It’s harder to be a mean person than it is to be a genuine, nice person.

Jason Adamchak: Let’s dive into some music talk; fresh off your latest EP release, Momentum, which contains six songs; I would love to hear what was the momentum you were trying to accomplish with this EP?

Evalution: So honestly, the name kind of just came to me naturally because I got to the point where I could hear other artists going on my tracks and getting that validation. I could finally feel I had some momentum. And I’m like, I finally feel where I’m at the point creatively where I need to keep making music and keep working, keeping that momentum going. It’s like when you see an artist do something, and they drop off the face of the earth for a year, and it’s hard. Primarily a growing artist. When you’re at my level and smaller, it helps to keep that momentum going. So that was was my main thing. I wanted to center all the tracks around movement and something that has momentum. So like balance rotation and wave energy.

Jason Adamchak: Is any one specific track on your Momentum EP that speaks out to you more than the others?

Evalution: Beatbox 2! I probably love that track the most out of the EP because I’m always trying to blend musical elements into bass music. I hate when I see someone, and it’s just like up and down drop, drop drop. I love to see those musical elements. That track doesn’t always get the best reaction because it’s a way slower track. But I’m like, that’s the one I’m most proud of. And I’m really excited to play it live with my sax player Chris Sgammato for the first time. I think it’ll bring a whole new energy to doing it live.

Jason Adamchak: One of my favorite collaborations you have done is with STELLER, and it’s called FL Sound; and I would love to hear more about the creative process behind that and what initiated it?

Evalution: That one actually came together super quick. I think we made that song within two weeks. I sent her something like the first half of an idea for a drop. She sent me back something for another drop, and then we just kind of chopped up pieces and put them where they fit. And we were like, yeah, this works. We were really happy with that one, and I was grateful to work with her too. Because she’s a genuinely nice human being, and she’s crushing her right now. We were fortunate that Bassrush and EDC worked with us to release it the week of EDC Orlando because we told them this is a Florida song.

Jason Adamchak: Other artists you have played alongside are 12th Planet, Blunts & Blondes, Champagne Drip Kill The Noise, NITTI GRITTI, Subtronics, and so many more. Who is the one artist that you have not played alongside yet that you are itching to cross off the list?

Evalution: I got the perfect one. So to be real, for a while, it was Ganja White Night. I was fortunate enough to play with them in Chicago at Aragon Ballroom a couple of weeks ago. That was a dream come true. After Ganja, I would say the next person is GRiZ. He’s playing at Imagine Music Festival. I am also playing Imagine Music Festival on the same day. He’s been such an influence on my tunes over the years. So it’s, it’s an incredible full-circle moment.

Jason Adamchak: The bass music scene in Florida has lit up in the past several years with even the expansion of bass-specific festivals such as the Forbidden Kingdom. What do you hope to accomplish in the bass community to help evolve it for generations to come? Any current trends you are noticing in the bass scene that could be improved?

Evalution: Honestly, I think the Florida bass scene’s killing it right now. It’s really cool to see. I think maybe if they dug a little deeper for those local lineups. Cause I think sometimes people feel like they owe something to someone where they have to put their friends on, and I feel that’s a lot of what you see at these local Florida festivals. There are a lot of outstanding local Florida producers who are crushing the game right now. So I love to see stuff like that. SMF is a perfect example, they got a whole Wubaholics takeover with all the boys from Wubaholics who are absolutely killing it right now. I know a lot of the music industry is connections and who, you know, but it’s nice when people give that talent a proper place to shine.

Jason Adamchak: Music Festival season is in full swing, and you have quite the already stacked lineup for 2022, Sunset Music Festival, INTERSTELLAR, Fire Lights Music & Arts Festival, and Imagine Music Festival. Do you have any specific plans for each of these festivals on the direction you are going to take with your sets, or do you prefer to live in the moment when preparing for festivals?

Evalution: I’m constantly changing it because I’m always making new music and edits. So there’s always going to be new stuff if you see me. But like I do like to play a lot of my original music. So you’ll hear all those tunes for sure. Um, I’m just really excited. 2022 is the first year for the festivals I’m playing that I haven’t been on a local stage. Like last year I could only do SMF and EDC Orlando for both of them on the local stages/tents. So now, I get to play here on the bass stage this year for SMF. I get to play Imagine’s main stage. And I’m like, I’m fortunate to be moving up and getting into those actual stages where I can showcase my talent and sounds.

Jason Adamchak: Let’s move into some closing questions, any upcoming projects you are currently working on that you can share? Where can everyone follow your journey?

Evalution: So I’ve really been trying to focus on remixes again this year. I felt like I put out many original tunes last year, and I have an extensive catalog under my belt now. So far this year, I’ve done the Don’t You Worry Child remix, the Jamming one, and the Congratulations one just trying to remix throwback tracks that remind me why I’m doing this. And then get it with labels as well and further those connections. I have plans for my next EP. I want to have it sent out by July. And the plan is to go with SubCarbon Records. Again, I want to keep putting out EP’S and like big projects with them because they put on for their artists. They’re just good people. And like I’m fortunate to be working with them. They influence that all out of me. So I’m a little weak on Twitter and TikTok right now. I’m trying to get into it. Um, I would say mainly I’m on Instagram and Facebook the most.

Jason Adamchak: Do you have any last-minute words before we go and enjoy Sunset Music Festival?

Evalution: I just really want to say, first of all, thank you for taking the time to interview me. I really appreciate it. It’s always great to talk with blogs and people who genuinely care about the music in the industry. So thank you for that.

Staying humble in the music industry has its rewards. Being able to use your voice and make an impact with the music being created is a gift that Evalution has mastered over the years and continues to do so. He is the prime example of working hard and promoting gratitude not only for himself but for the bass community. Thank you for sharing your stories with us; we cannot wait to celebrate your future successes.