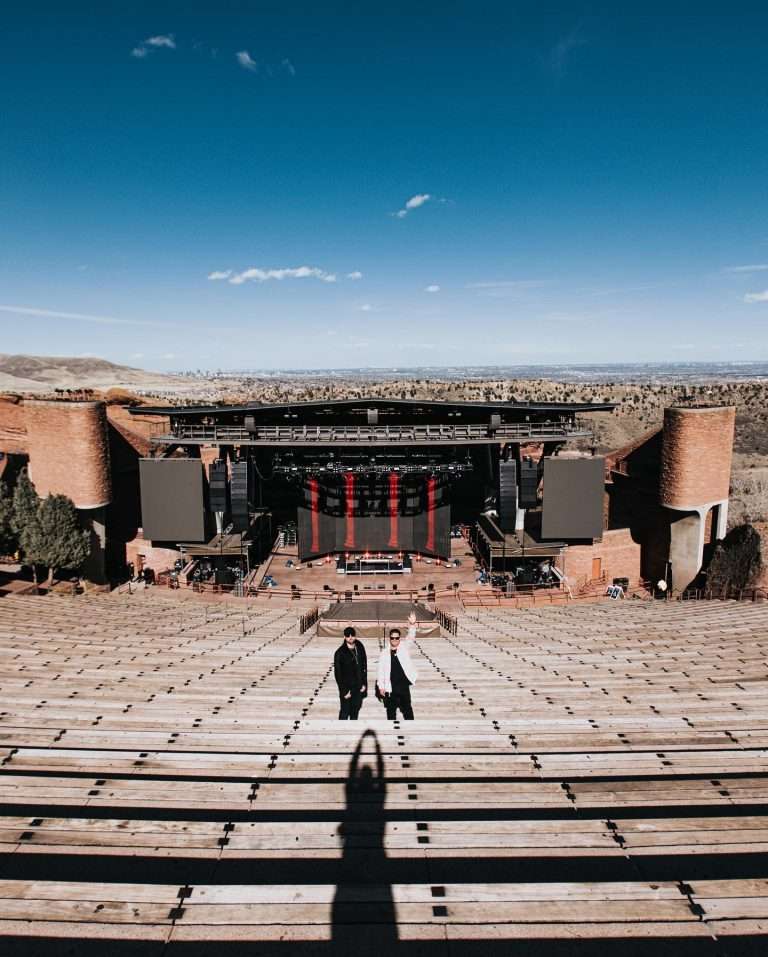 Red Rocks Amphitheater, located in Morrison, Colorado, is a venue that surrounds its guests with natural beauty from all corners and directions. Dreams of attending the iconic venue embed into any musical artist and music fan. Playing on that stage is undoubtedly an achievement, but having a headlining show is different. Gorgon City, an English electronic music production duo consisting of Kye Gibbon and Matt Robson-Scott, performed their first headlining show at the legendary Red Rocks on April 14, put on by AEG Presents. The night was full of crisp, clean energy, a stacked lineup of support and opening acts, and live singers creating a night to remember forever for who was in attendance.

Coming hot off their successful third studio album “Olympia” via Positiva/EMI and a 2021 tour, the duo wanted to break ground and make their mark on the rocks that consume Colorado. The pair announced the show via social media in November of 2021, and the internet could not handle the news. Gorgon City at Red Rocks was a no-brainer, and without hesitation, tickets purchased, plane tickets secured, and an Airbnb followed suit. Just like that, it was a full send to Denver to experience our first Red Rocks show, and it would be with legends Gorgon City; excuse me while I pop like a balloon from all the excitement.

Music and venues go hand in hand and help ignite each other, showcasing the inner beauty and talent. Red Rocks is easily one of those venues because of the history, incorporation of mother Earth, and acoustics. For anyone who has never been before, like me, the anticipation build-up for the venue is indescribable. Picture the first time attending a live music event and keep multiplying that feeling. With the forum being outside and climate change in full swing, checking the weather and packing essential clothing is a must. The temperature and wind chill had us pack thermal after thermal in our luggage. Pro-tip, ask your friends and family who live there while packing to get another opinion besides The Weather Channel or Google weather. Once we landed it was time to embark on the journey of a lifetime to Red Rocks.

The drive to Red Rocks is as breathtaking as the venue itself. The venue is right outside the city of Denver, and once you arrive, the parking is free, which is beautiful; then you begin your hike up to the venue, which is a workout, but the moment you start walking, the connection with the rocks start to intertwine. Several entrances help speed up getting in, and a handful of areas to order food and drinks. The lineup for the show consisted in this order: Azzecca, LP Giobbi, Totally Enormous Extinct Dinosaurs, Damian Lazarus, and then Gorgon City. None of these supporting acts disappointed and helped illuminate the stage in preparation for the headling act. Each time a new supporting act came on instantly, it was a follow on their Spotify and brought the house down.

Damian Lazarus & Gorgon City ft. Leia Contois performed their latest release that came out the day of the show “Start Over” live on stage right before Gorgon City entirely took the stage.

Olympia took over the stage with visuals that helped transport guests to Greece during their performance. There was something in the air that night because the rocks reflected just the right vibes and frequencies, or maybe it was the full moon effect. Yes, a full moon was shining bright in the sky; a sign from Mother Earth herself symbolizing the night was meant to be. Halfway through their set, a surprise guest came out on stage to sing her collaborations with the duo, and it was Via Rosa, which is 1/2 of DRAMA. The artist sang “You’ve Done Enough” and “Nobody,” which are the highest streamed tracks on the “Olympia” album. DRAMA was the icing on top of the cake because it created a more intimate and immersive experience for guests.

To end the night, we walked to the top to capture the venue from a different angle, and let me say, jaw-dropping. The soundwaves bounce off every rock surrounding the platform and help amplify the music so it can be absorbed no matter location. Finally, reaching the top, the city of Denver is the perfect backdrop behind the stage, and the bird’s eye view one gets is one that will make you a deer in the headlights. Words, pictures, and videos do not do Red Rocks justice at the end of the day.

Congratulations, Gorgon City, for what was not only the best first Red Rocks show for us but probably will go down in history as one of the best house shows those rocks will ever witness. Without a doubt, I do not see this being the last headlining show the duo will put on at that venue, and if and when they announce another, BUY THE TICKETS. Thank you for a night full of memories, dancing, love, laughs, and reunions.